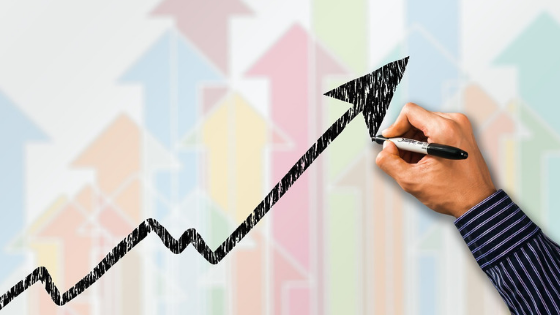 The Organisation for Economic Co-operation and Development (OECD) is a common forum for the 35 OECD member-country governments to come together and share their problems and seek common solutions. The OECD works with governments and gathers data to help them understand what drives economic, social and environmental change; predict future trends and set international standards to stimulate economic progress and world trade.

In June 2018, the OECD launched the Global Revenue Statistics Database (GRSD) which provides the largest public source of comparable tax revenue data from 1990 to 2015. It currently covers 80 countries and is set to expand to 90 by the end of 2018. This information offers key insight on major tax policy reforms and impact on the economic growth of various nations.

The data presented in the Global Revenue Statistics Database is classified using the OECD classification of taxes. This ensures consistency and offers a granular view of tax revenue categories. Thus, making it easy for global policymakers, academics and researchers to study the data.

There are two main indicators in the database that measure different tax levels and tax structures.

We need to have an insight to macroeconomic conditions to understand recent trends in growth inflation, productivity, investment, labour market and finances. Also, in the same breath, macroeconomic trends provide the background information to help us understand Global Tax Revenue Trends as well as Key Tax Policy Changes and Reforms. Let’s have a detailed look at the trends and the key reforms.

This section provides tax revenue trend data by analyzing both total tax-to-GDP ratios and tax mixes of all OECD countries along with Argentina, Indonesia and South Africa. This overview of trends helps to understand the effects of previous tax policy reforms and sets the stage for the discussion on the tax reforms that were recently introduced.

Tax revenues as a share of GDP vary significantly. In 2016, Denmark had the highest tax revenues reaching 45.9%, closely followed by France with 45.3% amongst all the countries covered in the report. In addition to that, seven countries recorded tax-to-GDP ratios above 40% and 20 countries between 30% and 40% of GDP.  The countries with the lowest tax-to-GDP ratio were Chile (20.4%), Mexico (17.4%) and Indonesia (11.8%). 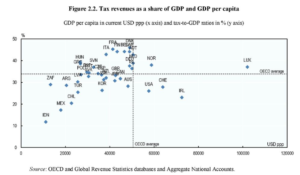 In 2016, the OECD average tax-to-GDP ratio reached a new record level from 34% in 2015 to 34.3% in 2016. This is the highest recorded ratio since the OECD started collecting tax revenue data in 1965 with a total increase of 10% approximately over the past 50 years. Increasing tax-to-GDP ratios have been a common trend across different groups of countries. 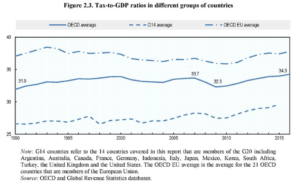 The rise in tax revenues across OECD countries in the years following the crisis was due to the adoption of tax reforms aimed at strengthening public finances. However, the current focus on tax policies has shifted away from fiscal consolidation to supporting businesses and households through tax cuts. The effects of these changes on tax revenues are yet to be seen. 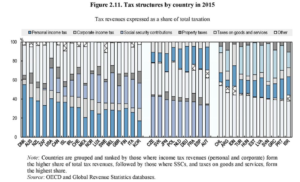 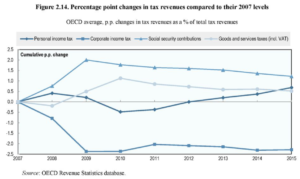 In recent years, the tax revenue from the PIT has increased considerably in 20 of 35 OECD countries. As countries continue to reduce the CIT rates, the pressure to fill the shortcomings fall on other labour taxes like PIT and social security contributions (SSCs).

In Australia, Canada, Denmark, Iceland, Ireland, Mexico, New Zealand, Switzerland and the United States more than 40% of the tax revenue was derived from labour taxes. The share of the PIT revenue varied from 9.7% in the Slovak Republic and 9.8% in Chile to 41.5% in Australia and 55.2% in Denmark.

This section provides an overview of the latest tax reforms in OECD countries, Argentina, Indonesia and South Africa. It identifies the most significant tax reforms that were introduced as well as common tax policy trends across groups of countries. Trends in each category of taxes are discussed in detail here to provide an insight.

Many countries have introduced tax cuts on labour income to enhance fairness and by increasing Earned Income Tax Credits (EITCs) improve the potential of labour market participation as well as enhance PIT progressively.

While the majority of countries continue to increase PIT rates to stimulate growth, some countries like the USA, Netherlands, Latvia and France introduced tax reliefs to support savings, investments and to lower tax burdens on small savers.

Similar kinds of reforms have been taken regarding the Social Security Contributions (SSCs), where the rate changes have been broadly evenly split between cuts and increases as have base changes between broadening and narrowing measures.

When combined PIT and SSC can be a great source of tax revenue, with the SSC overtaking PIT in some OECD countries as the most important source of tax revenue. For example, France introduced a flat rate of 30% on personal income which includes interest, dividends and capital gains. It is split into two parts and comprises of 12.8% income tax component and a 17.2% social contribution component. This is an effective measure to reduce PIT for higher-income taxpayers.

The tax revenue derived from CIT is going down as the top industrialised nations across the world are cutting down the corporate tax rates. Between 2000 and 2011, the rates for CIT in OECD countries had dropped from 32.6% to 25.4%.  The most significant CIT rate cut was introduced by the USA and as a part of the comprehensive Tax Cuts and Jobs Act, the federal CIT rate was cut from 35% to 21%.

The trend of cutting CIT rates seems to be a global phenomenon as 31 countries have reduced their CIT rates in recent years. However, there are a few countries which are an exception to this phenomenon,  like Turkey who increased its general CIT rates from 20% to 22%, the Canadian average CIT rate has increased from 11.7% to 11.8%, Korea increased the top CIT rate from 22% to 25% etc. Twenty two of the 38 countries covered in the report, now have a combined statutory CIT rate equal to or below 25%, against only 6 in the year 2000.

Other countries like Spain, Israel, Norway and Estonia have also lowered their corporate tax rates and increased corporate profits. The share of CIT revenue varies from 4% in Finland, Hungary and Slovenia to 17% in Norway and 21% in Chile.

Along with CIT rate cuts, significant reforms are being introduced to increase corporate investments.

One of the most notable reforms is the transition of the United States from a worldwide to a (hybrid) territorial tax system. In 2009, the United Kingdom, Japan and New Zealand had also moved towards territorial tax systems for the taxation of foreign corporate profits. The rationale behind this is two-fold. First, it allows the domestically headquartered MNEs to face the same tax burden as its competitors in the foreign market and second it doesn’t discourage companies from repatriating foreign earnings (“lock-out” effect).

In 2018, Belgium introduced a full participation exemption regime, which raised the dividend exemption rate from 95% to 100%. It abolished the minimum tax of 0.412% on capital gains of large companies. Similarly, other countries like Luxembourg, Hungary, Japan, Germany have also made CIT reforms to encourage investments.

The main base-broadening reforms have focused on anti-avoidance, implementation of base erosion and profit shifting (BEPS) counter-measures and additional restrictions to loss carryover provisions. Belgium, UK and Ireland are the classic examples of countries where base broadening measures have been introduced.

Base erosion and profit shifting (BEPS) refers to a strategy for tax evasion by exploiting the ambiguity and gaps in the taxation rules to move the profit earned to a location with low or no-tax rules. Over 110 countries and jurisdictions are collaborating with OECD to combat BEPS and increase the revenue share from different taxes. Click here to read the complete BEPS Action plan suggested by the OECD

Focus on the taxation of highly digitalised business

The taxation of highly digitalised businesses is getting a lot of attention along with the focus on the tax challenges arising from digitalisation. The emergence of new business models due to these changes have placed pressure on two key principles underlying the international tax system, namely “nexus” and “profit allocation”.

In March 2018, the OECD published a detailed report on the tax challenges due to digitalization, which pointed out different features of digitized business models like – heavy reliance on intangible assets, especially intellectual property (IP) and the importance of data, user participation and their synergies with IP. Click here to read the OECD 2018- Interim Report on the Tax Challenges Arising from Digitalisation

Base broadening measures to increase the reduced VAT rates

Some countries have increased their reduced VAT rates or reduced their scope to maintain a broad VAT base, like

These reforms are broadly in line with OECD findings and recommendations. Also, administrative improvements and anti-fraud measures have been a central part of the countries’ VAT reforms including the use of Standard Audit Files for Tax (SAF-T) to enhance tax collection and combat fraud.

As per the guideline laid down by the OECD, several countries have adopted the methods of eliminating VAT relief schemes and charging VAT on the import of low-value goods as a measure to increase tax revenue.

In July 2018, the Australian Tax Authorities updated their import tax rules by implementing a 10% GST on the import of goods below $1000 which were earlier GST-free. According to the proposed budget, this GST plan will raise approximately $300 m over the next four years.

Switzerland is also looking to level the playing field between domestic and foreign companies by amending its VAT registration rules. As of July 2018, the new rules to determine whether the companies have to register for Swiss VAT are based on global turnover rather than the Swiss turnover.

Excise taxes on products like alcohol and tobacco have been raised  for revenue-raising purposes but also as corrective tools to discourage the consumption of products that generate negative externalities or internalities.

In the global markets, the OECD member countries are considered to have a high market value that influences potential investors. It adds to their reputation and also impacts their financial ranking internationally. Countries all over the world are greatly benefited by the insights, statistical databases and studies carried out by the OECD. The data provided is a significant contributor to drawing economic and developmental policies and making structural and institutional changes for the member countries.

How UCB can help your business?

Over the past 30 years, experts from United Cash Back has helped more than 19000 companies get their VAT back keeping in line with the updated reforms in the Tax and VAT structures happening around the world. We are the global leader in cross-border VAT recovery and foreign VAT advisory and we can help you submit accurate VAT refund claims and get maximum VAT back for your business.

Connect with us today!

Get next update straight to your inbox

We keep up with the global tax trends and regularly write about latest happenings in the taxes and VAT landscape. If you are not already subscribed to our blog, you can do it by just entering your email address. All updates will come straight to your inbox.

Get a Free VAT Recovery Assessment

Claim what is rightfuly yours.